Menu
Log in
Register
Install the app
Untitled Document
You are using an out of date browser. It may not display this or other websites correctly.
You should upgrade or use an alternative browser.

I found this through a web search, which as it so happens had nothing to do with saxophones. It was at a somewhat nearby Pawnshop. After looking carefully aat all the pictures I bought it online for $325 (though I did have the option of a refund within 2 weeks). Later that day I came to the shop and took it home

Here are the positives:

1) It needs everything redone as I think the pads are mostly all original, but the pads themselves have interesting resonators that I think I'm going to save.

2) Its lacquer is what? 97%? I think it is amazing considering this was made when no one had yet thought to put a roman numeral after the name of a war. It just is missing some nicks on the keys, but the lacquer on the body is mostly intact. In places it is 'crackling' like old oil paintings do.

3) No nickle to polish. I have this love/hate thing going on for nickle plating as I assume many others do. It does look good when clean, but it looks just terrible when tarnished or dirty.

4) The engraving is beautiful!

5) Has all the desirable features of that era: double socket neck and a three ring

3) Low C won't close because it's cork stop pushes against the Eb rod.

4) High D is jammed and hard to move and I haven't been able to get the rod out.

5) The body above right around the G is bent at about a 2 degree angle. I think this may be contributing to issue 4 and the event that caused this may have also caused issue 3.

Playing a game of sleuthing out what happened, there are these relevant facts:

The entire beak of the mouthpiece was broken off and missing. There is a scraping of the type of stuff you might find painted onto cinder block right on the edge of the jagged break.

there was a slender neckstrap TIED to the upper-most strap ring.

I think this was a well taken care of horn that found its way into the neglectful possession of a family member. It was put away in a moist basement where the case deteriorated. When found during a move or something, the case was tossed and someone started to play the instrument. The neck-strap had a catastrophic failure during a concert, and it was tied back on for the rest of the gig with the horn largely unplayable. After this it was put in box or something, forgotten about again until it ended up at pawn decades later.

Now it's in the possession of an inexperienced tech who's a bit impatient, melts too many clarinet holes, and sometimes jumps in without properly studying how to apply the fix. 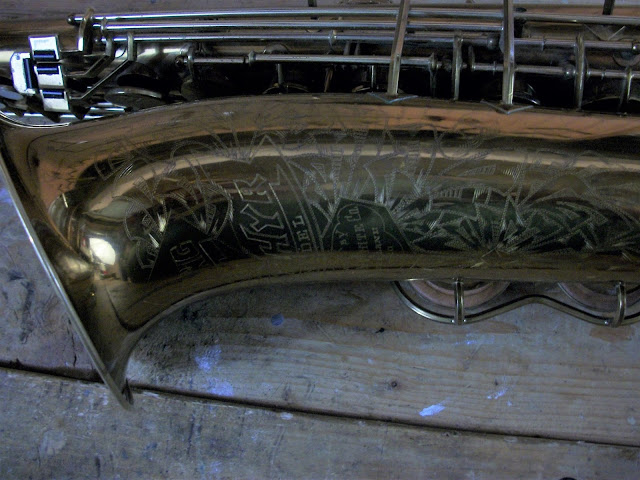 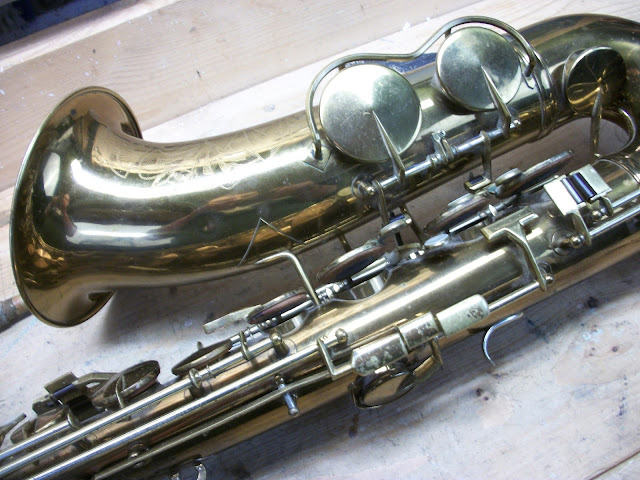 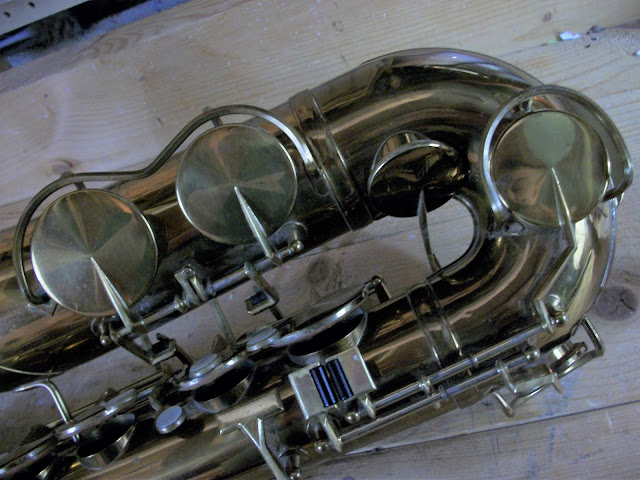 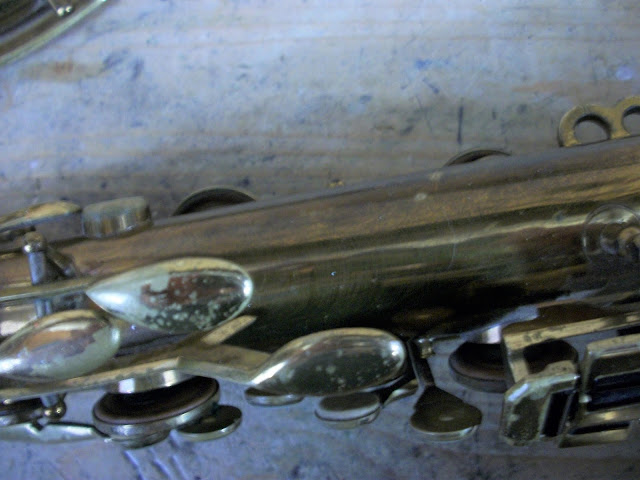 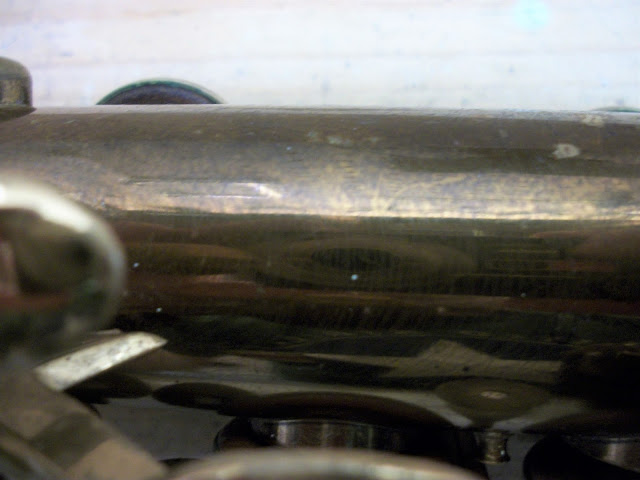 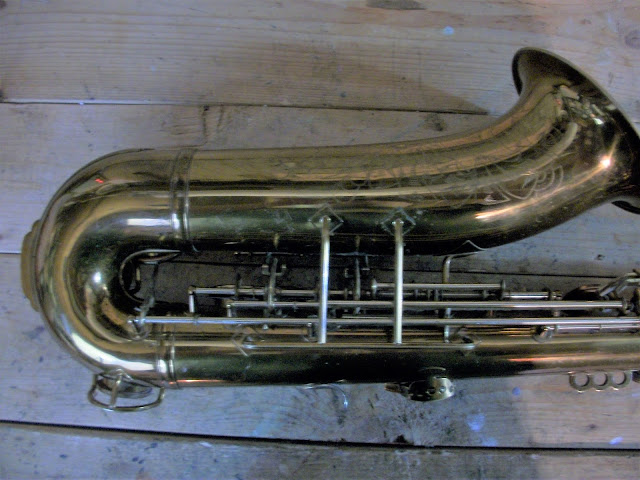 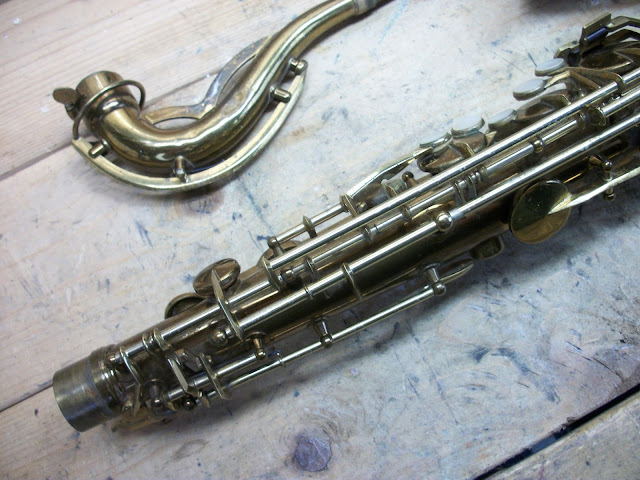 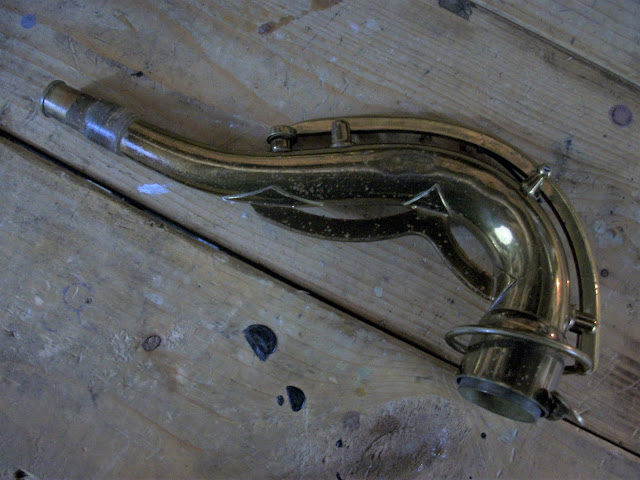 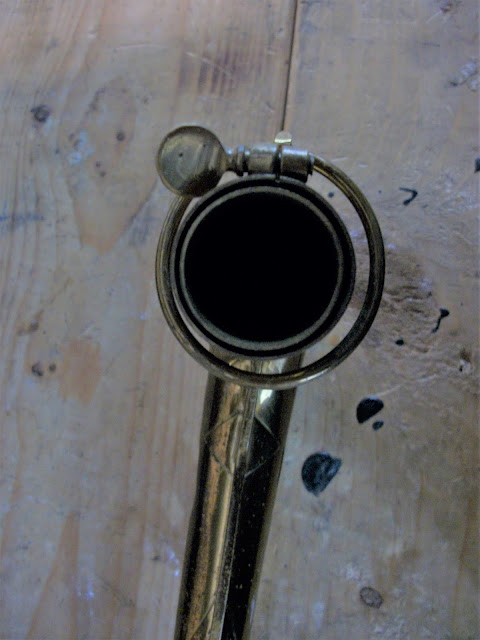 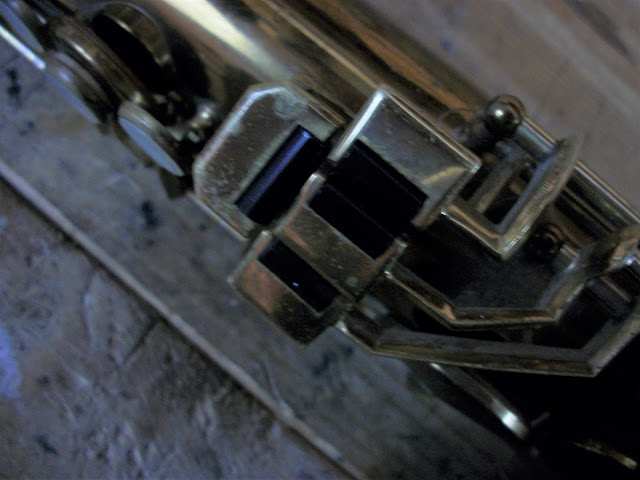 Yes, if you were posting on ebay

In the first picture of you posted ...

All those rods look significantly bent. Is that from your camera?

I'm not a repair person -- I've mentioned that many times -- but it is a very nice looking horn. It does look to have a good percentage of lacquer remaining and that engraving looks really sharp. I think that you could easily get back what you paid for it if the repairs needed are too extensive.
Yes, I'm the Artist Formerly Known as Saxpics.
If you need me or just want to chat, e-mail me @ thesaxinfo-at-gmail.com.
Check out the Bassic Sax + TheSaxInfo Picture Galleries!
Quote of the Day: "It sounds like a psychotic kazoo." - Claude 013

yeah, that's my camera. The bottom appears to be straight. For the top I really wish I could better illustrate where the bend is, which is shown in pic #4 and #5. I'm trying to figure out if this can be righted with a slam tool or if the body should be separated and straightened with a mandrel.

speaking of lacquer %, does 90% sound like a better number? I'm not sure if this gets sold or not, have to play it first and I have a lot of other projects

I mentioned this somewhere else. I'll mention it again:

I used to collect coins. There are various "blue books" for coins that say things like, "Lincoln penny. If you can't see the pillars on the monument on the back, the coin is no better than 'good' quality." I really wish we had something like that for musical instruments -- and I mean ANY musical instrument. However, unlike a penny, you have to also worry about the sax's mechanics, too. That would be a separate scale.

I just Googled because I was interested. It appears that nobody has measured the whole surface area of a saxophone. That's a tad interesting in and of itself. So, let's try weight. An average tenor weighs 6.4 lbs. Calculating ... 0.192 lbs is 3%. That's a bit more than a deck of cards; 3 oz, interestingly enough

Yes. I did the math. Hmm. Maybe your horn really has 97% lacquer remaining ...
Yes, I'm the Artist Formerly Known as Saxpics.
If you need me or just want to chat, e-mail me @ thesaxinfo-at-gmail.com.
Check out the Bassic Sax + TheSaxInfo Picture Galleries!
Quote of the Day: "It sounds like a psychotic kazoo." - Claude 013
You must log in or register to reply here.
Share:
Reddit Pinterest Tumblr WhatsApp Email Share Link
Top Bottom